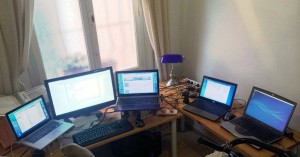 The main focus of WW2T lies on the possibility to play online against each other while earning a rating  similar to AREA or ELO. For this WW2T provides a web service for matchmaking that allows every player to list matches he would like to play as well as to apply for matches posted by other players. Once the 2 players have found each other and are both online the actual scenario is played P2P. Only the result is later submitted back to the WW2T web service in order to update the rating. All 3 play modes work now in their most basic form: hotseat, LAN game and Online game. From now on I will solely focus on usability issues during the game play to make it more accessible. A first release of the initial Alpha version looks likely in roughly a month from now.